Kaohsiung (pronounced Gow-Sung) was another one of those nice cities with good vibes, so I instantly liked it as soon as I arrived. I had to leave my hostel in Taitung at about 8:45 on Wednesday morning so that I could catch the #8172 bus from the bus station to the train station. I arrived at the train station at about 9:30 so I had enough time to get a coffee before catching my 10:08 train, which would take three hours and cost me 351TWD ($15.60AUD). I arrived in Kaohsiung just after 1pm and had to get to my hostel, which was close to the Formosa Boulevard station. Little did I know, this station was actually a tourist attraction because it has the “Dome of Light,” which is a huge stained glass ceiling, which also does a light show a few times each day. The stained glass really beautiful! 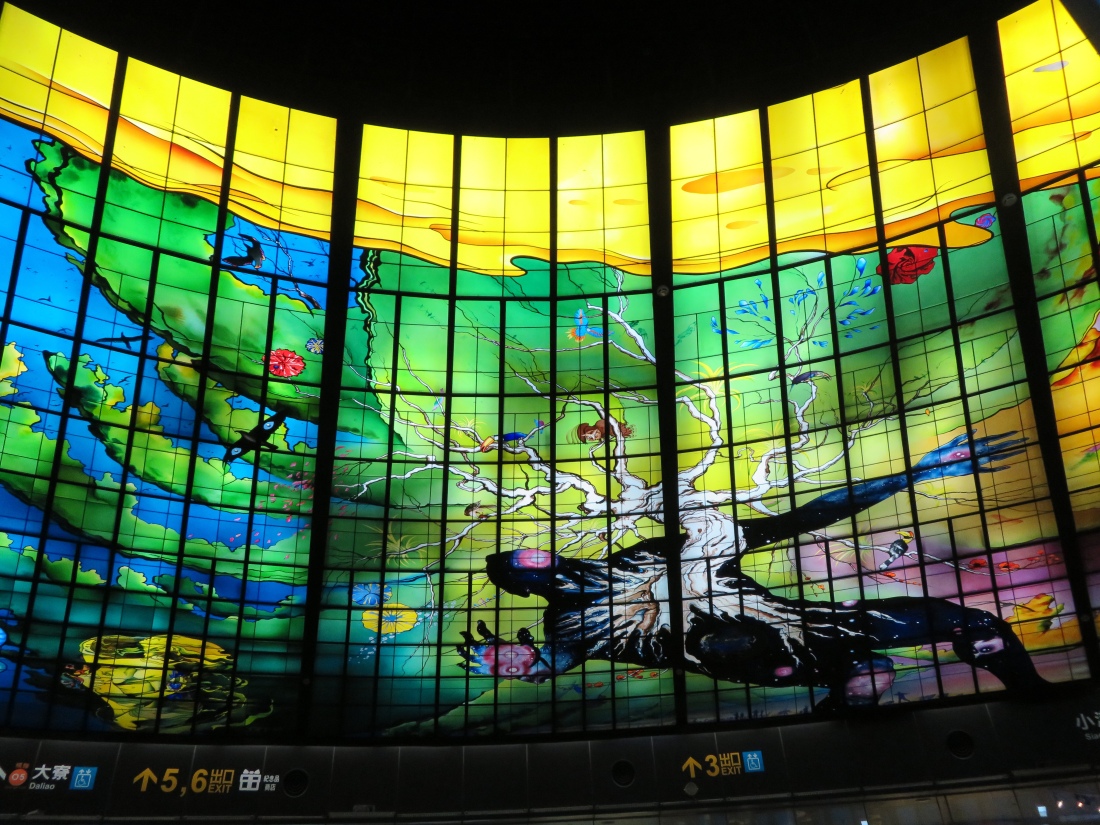 My hostel was called Trip GG Hostel and I paid 400TWD ($18.15) per night to stay in a 6-bed female dorm. This was by far the nicest hostel that I’ve stayed in during my time in Taiwan, and perhaps on my entire trip so far – it had breakfast included, a nice common area that looked over the entire city, and the beds were soft and spacious. Unfortunately, I couldn’t check in until 4pm so I dropped off my bags, and took the metro to the west part of the city. Conveniently, I had went back to the Formosa Boulevard station at the exact time that the light show had started, so I was able to enjoy that.

The thing that I’ve really liked about Taiwan is that the Easycard can be used in every city – on buses, trains, metros, etc. Therefore, you just have to add money on the Easycard (which you can even do at a 7-Eleven or Family Mart), and you don’t have to worry about finding individual tickets everywhere you go. I went for lunch at a restaurant called 港園牛肉麵 (Gang yuan beef noodles) and got the dry beef noodles (which still has a bit of liquid, but not as much as you would get in a soup).

This dish was so good! The beef was tender, and the noodles and broth had such a nice flavour. For the meal, it cost me 110TWD ($4.89). I then walked towards Pier 2 Art Center, which is basically what the name describes – a pier that’s full of different art work. It also had many shops so I checked a few out and walked down the pier. 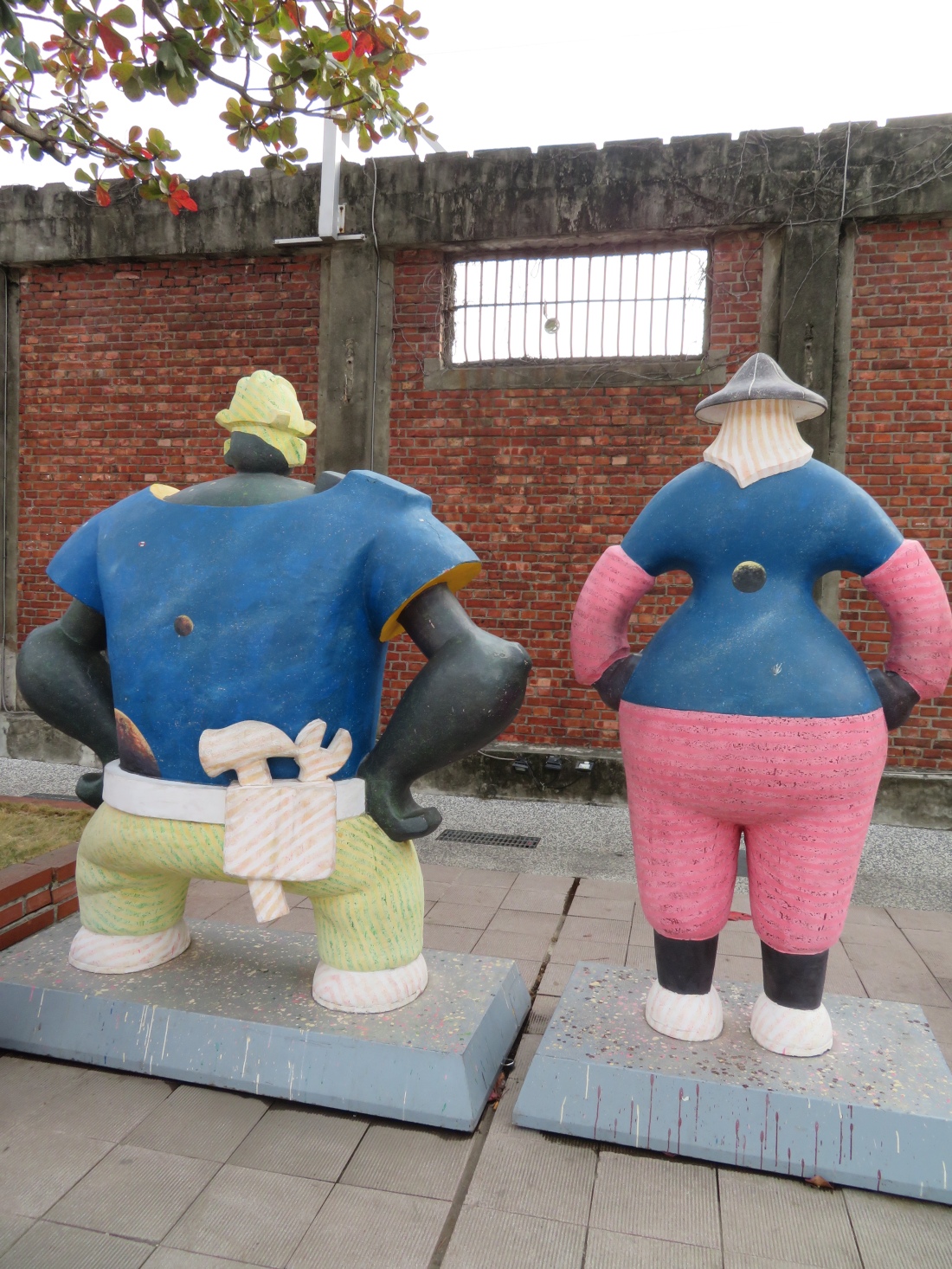 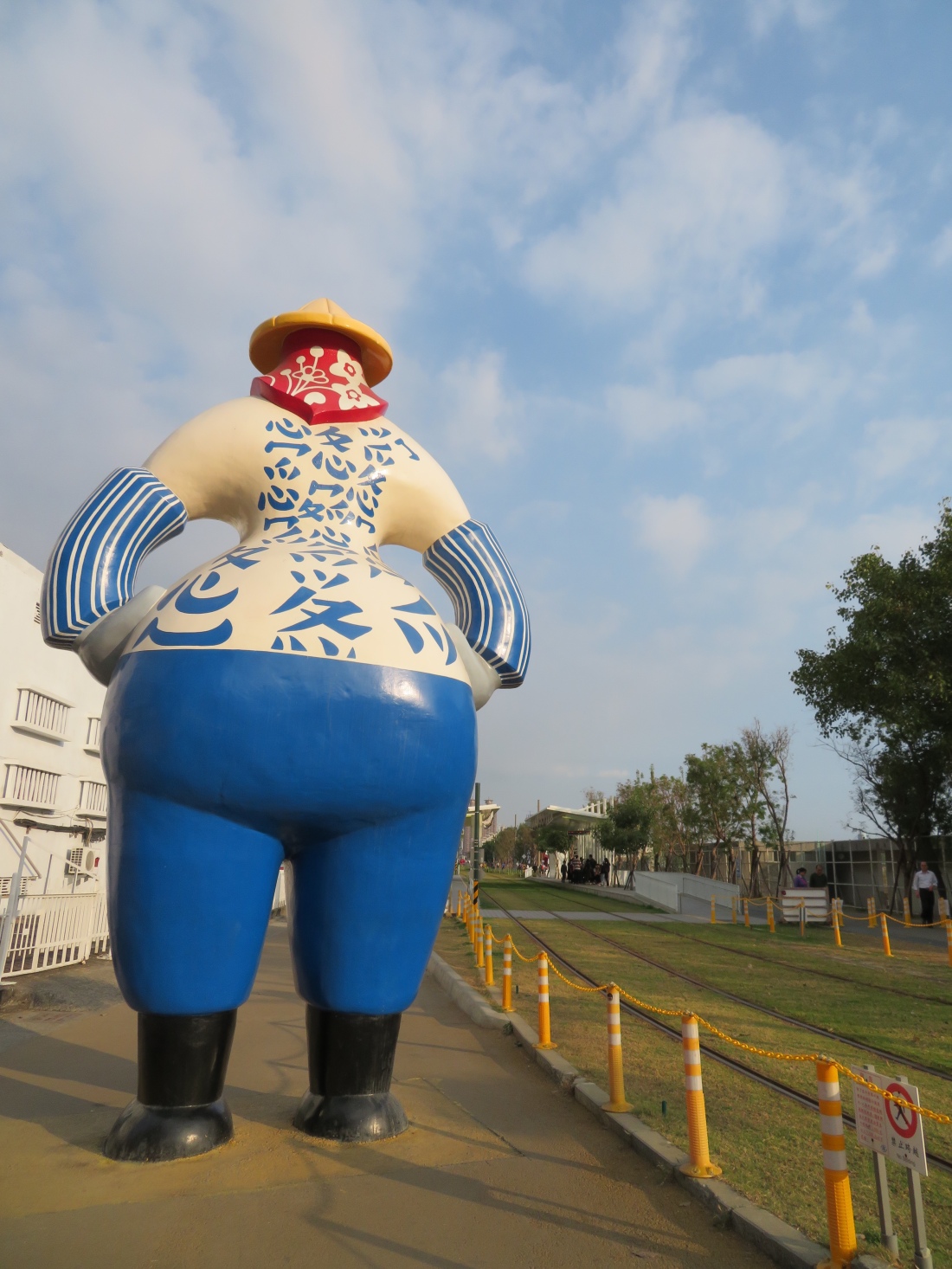 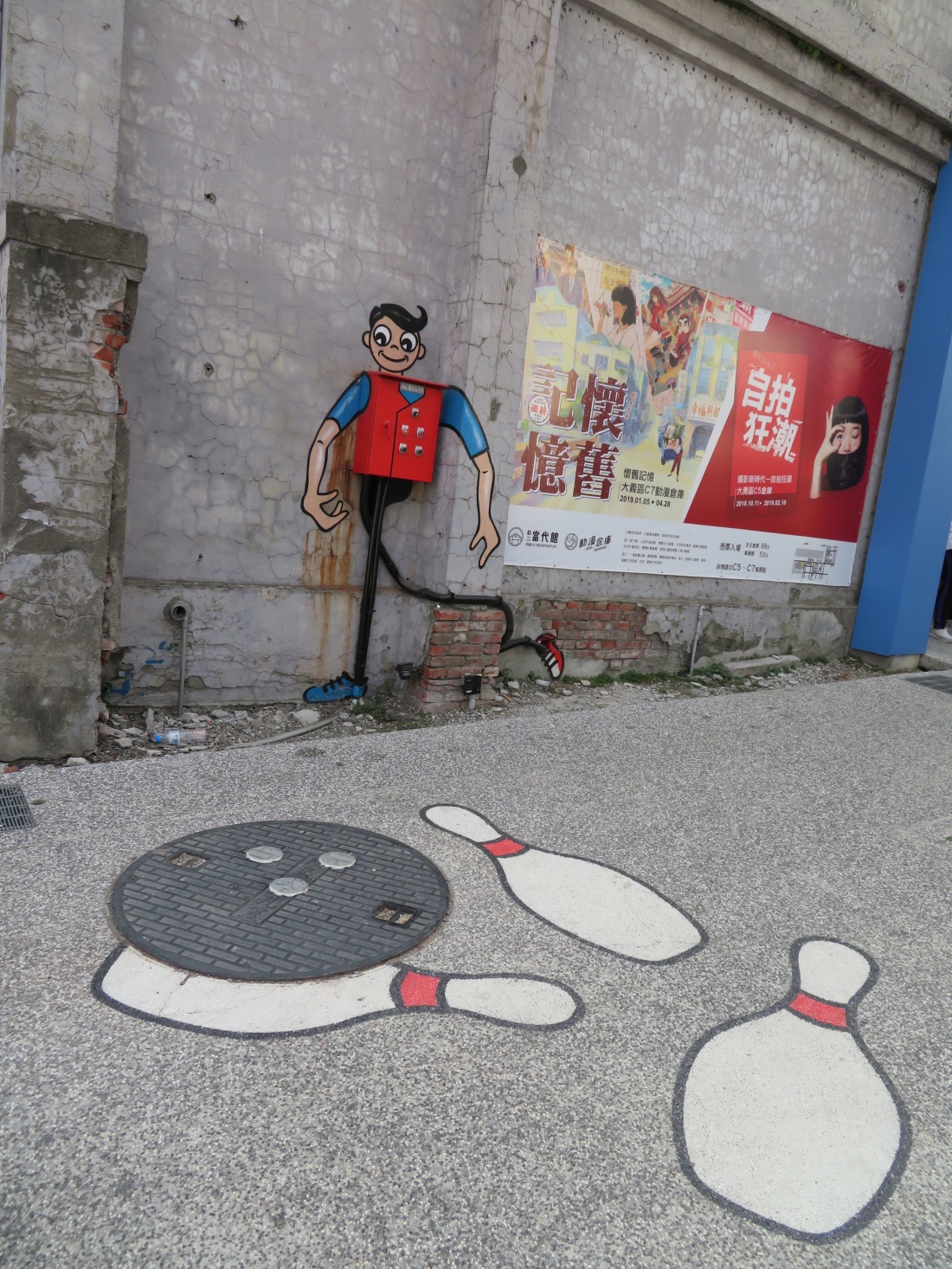 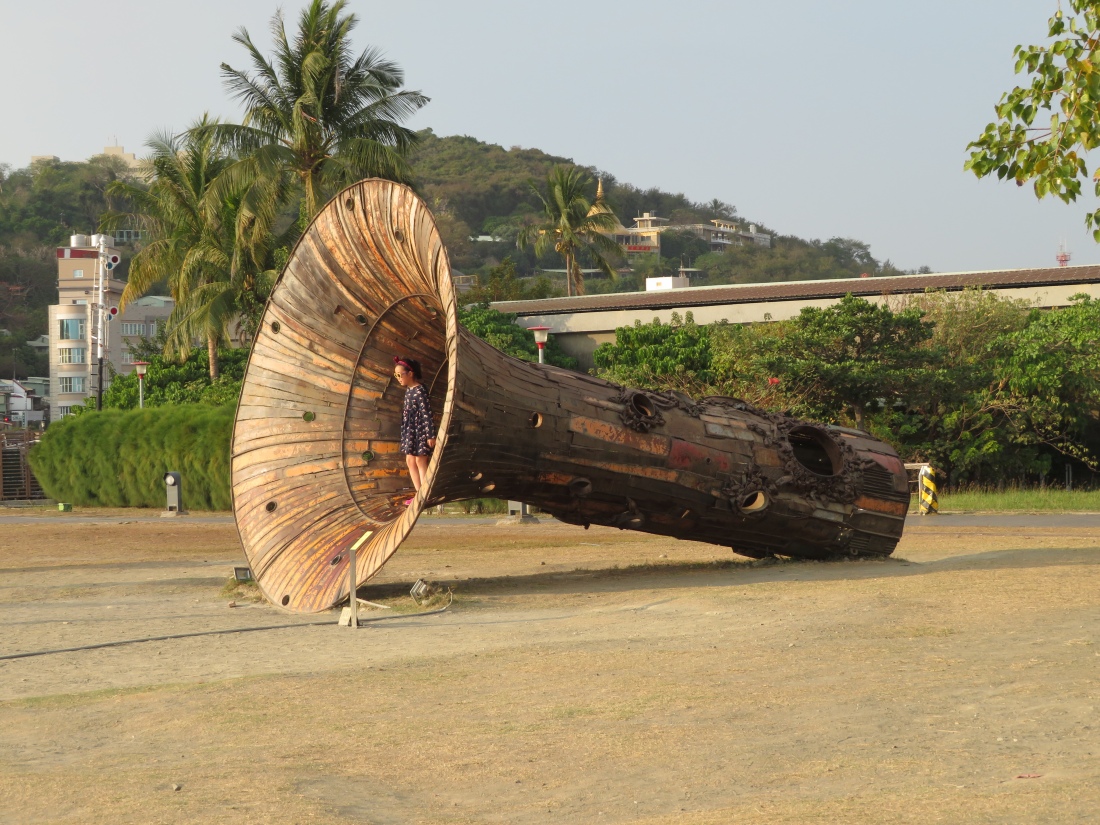 I headed back to my hostel around 5 so that I could check in and get my stuff organised. Conveniently, I was less than a ten-minute walk away from one of the night markets (Liuhe Night Market) and even though it’s not supposed to be as good as some of the others, I decided to still check it out. There’s a famous stand that sells papaya milk so of course, I had to go try some. The man working there is so friendly and as soon as he saw me in the lineup of tourists, he gave out a cheerful, “Hello!” The papaya milk cost me 60TWD ($2.67), which is quite a bit higher for night market standards, but the tourists still keep coming! After walking down the short two blocks of the Liuhe Night Market, I walked about 30 minutes all the way down towards Central Park, where there’s another night market with shops nearby.

I spent some time there but still couldn’t find anything that I wanted to eat. I’m not sick of the food here (I love it!), but I’m slowly getting sick of not knowing what everything is and not knowing what my options are when ordering food. Out of the countries on this trip so far, Taiwan has definitely been the most difficult in terms of available English translations, which is bizarre because it’s also the most modern-feeling country. I walked back to my hostel and nearly everything was closed since it was after 9:30. However, I noticed a bunch of people sitting outside nearby and saw that there was a 24/7 restaurant called 老江紅茶牛奶 (Lao Chiang). It’s known for its milk tea but I figured it wouldn’t be a good idea to have a bunch of tea before bed so I just ordered a pork floss & egg sandwich, which was actually amazing! I headed back to the hostel and went to bed.

On Thursday morning, I slept in a bit and then had some breakfast at the hostel (which was just toast and coffee). I decided to visit the Fo Guang Shan Monastery, which was about 50 minutes outside of the city. First, I had to take the metro to the Zuoying station and then I had to catch a bus to the Monastery. The bus E02 only left about once every hour, so I timed it just right. I arrived on the grounds just before 1pm and got something to eat for lunch, which ended up being a Taiwanese tortilla for 35TWD ($1.56). Then, I decided to check out the Big Buddha and eight pagodas area. The Big Buddha is the tallest seated bronze Buddha in the world, and is 108 metres tall. 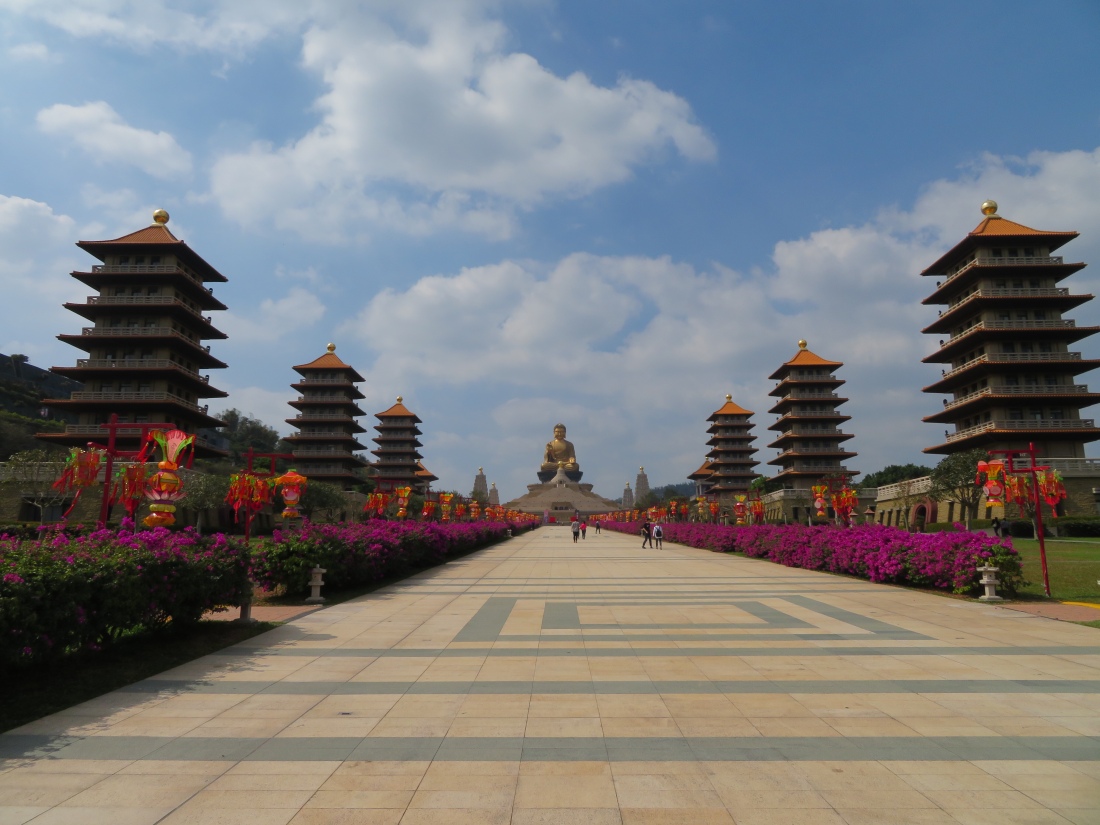 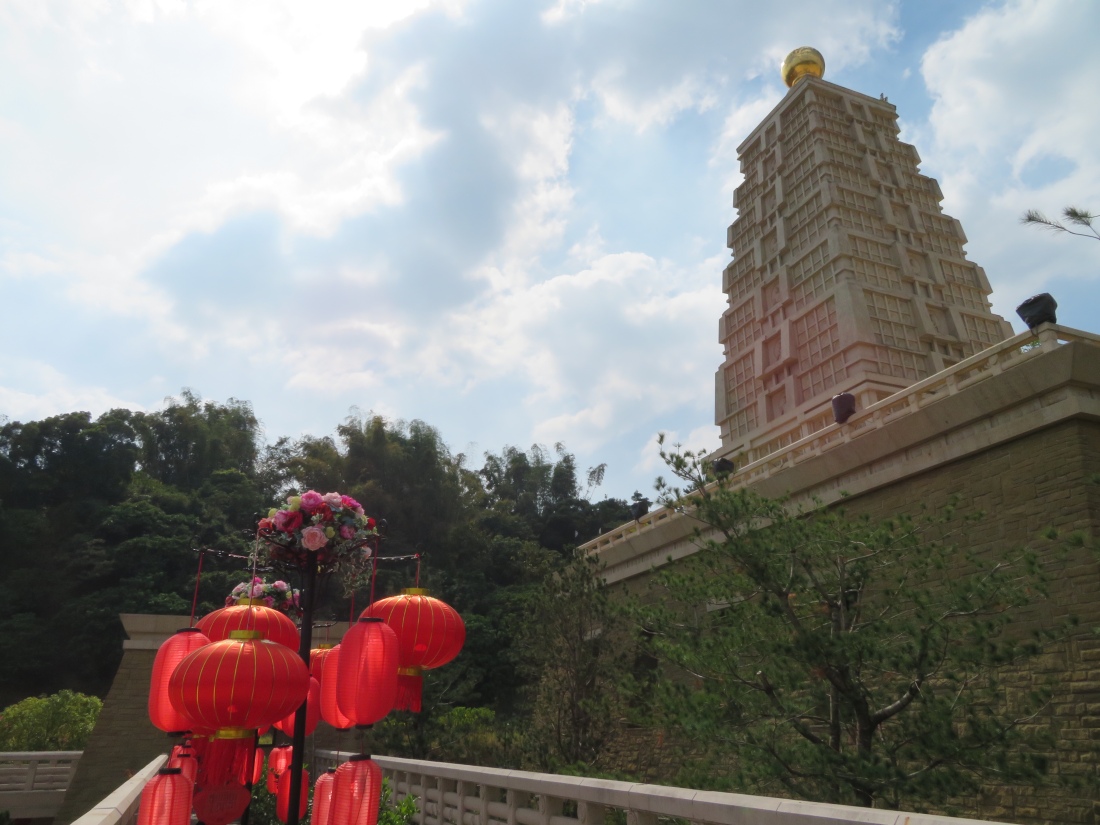 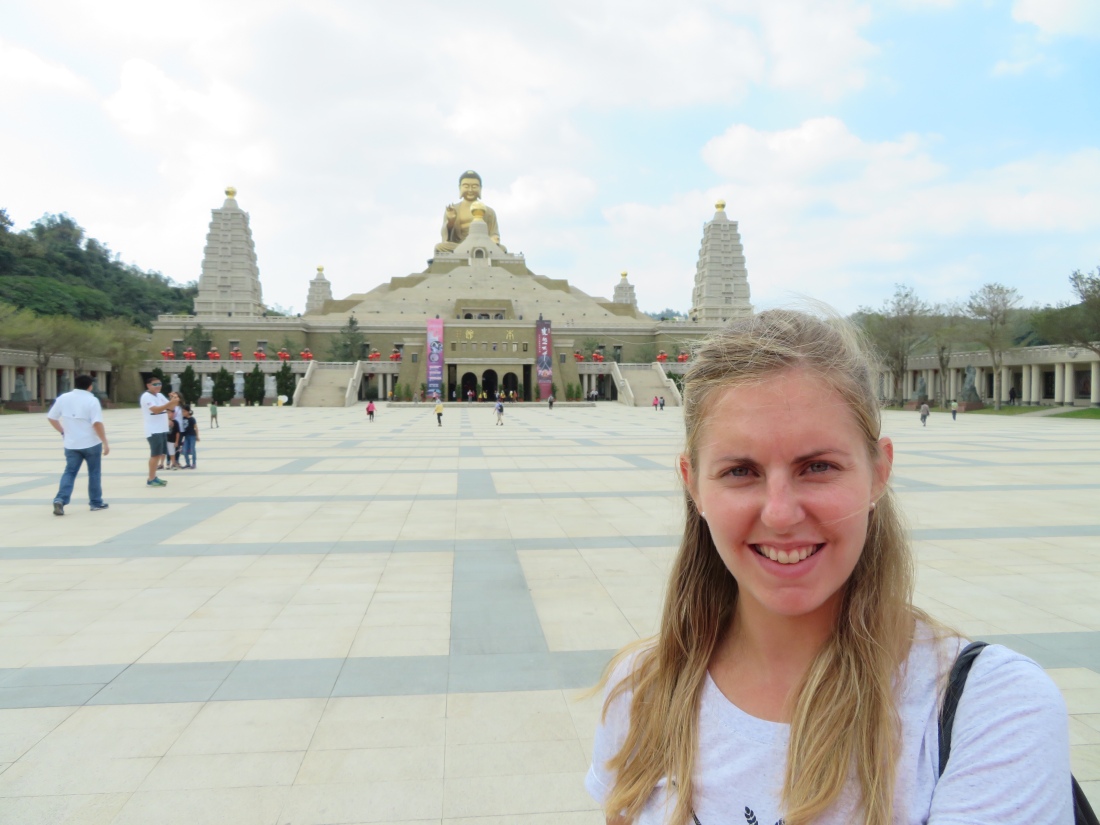 It was quite the sight to see! I walked towards the Buddha and at the bottom, they had a calligraphy room, where you could get a scroll and pen to trace the symbols that were on the paper. It seemed cool to do but when I asked about it, they said it would cost 1000TWD ($45.39!) so I decided to pass. I walked back towards the main area and then walked in another direction towards the monastery (there were three main areas to visit, so I focused on two of them). I had to walk up a huge hill along a road and then at the top, they had a beautiful garden. 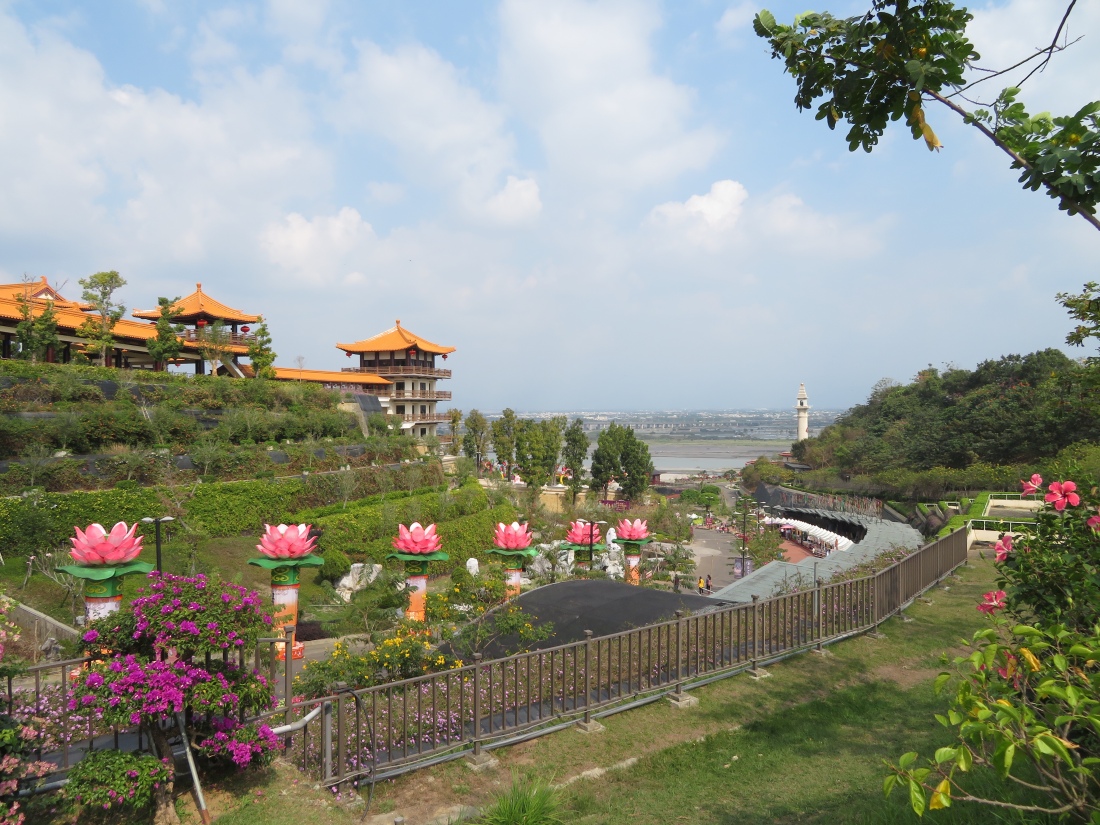 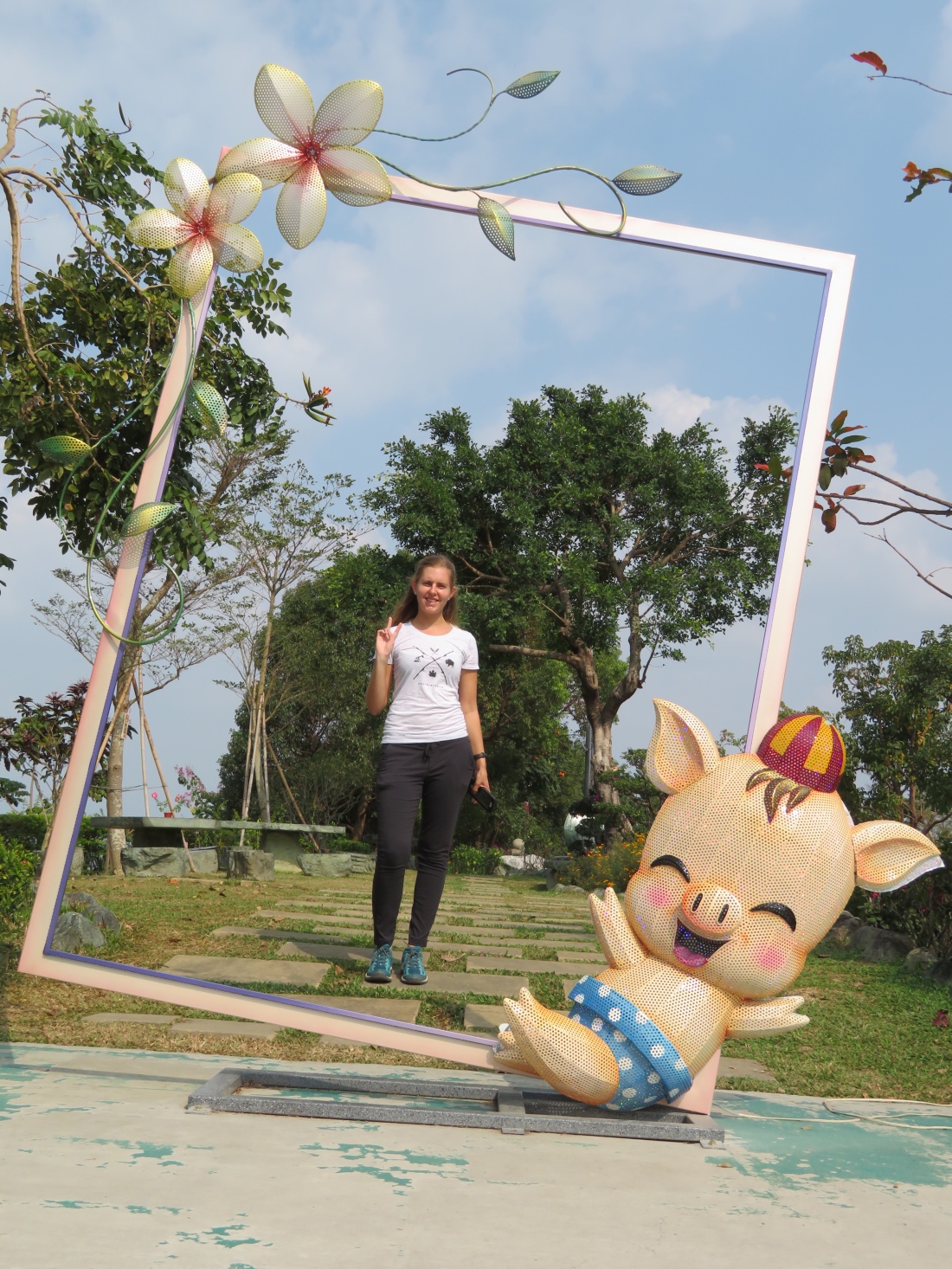 I kept walking and eventually made it to the monastery. It was good timing too, because I arrived during classes and I saw a large group of (what I assume were) monks-in-training slowly walking down a hill two-by-two while balancing bowls on their heads. They were all wearing darker coloured robes, and there were about four actual monks wearing the traditional lighter robes who seemed to be guiding them. Out of respect, I just stood still and watched, so I didn’t happen to get any photos of them. I continued walking and found one of the shrines, where I also wasn’t allowed to take any pictures. A lady gave me a flower and I wasn’t too sure what to do with it. She showed me to take it with both hands, bow down to the shrine, and place the flower with the other ones on the shrine. I did what she said and then continued on my walk. I finally found Great Buddha Land, which I had been trying to find but due to the lack of English signs, I never knew if I was going in the right direction or not. There were hundreds of Buddha statues in this area and it was so peaceful – I only ever saw two other people there at one time. 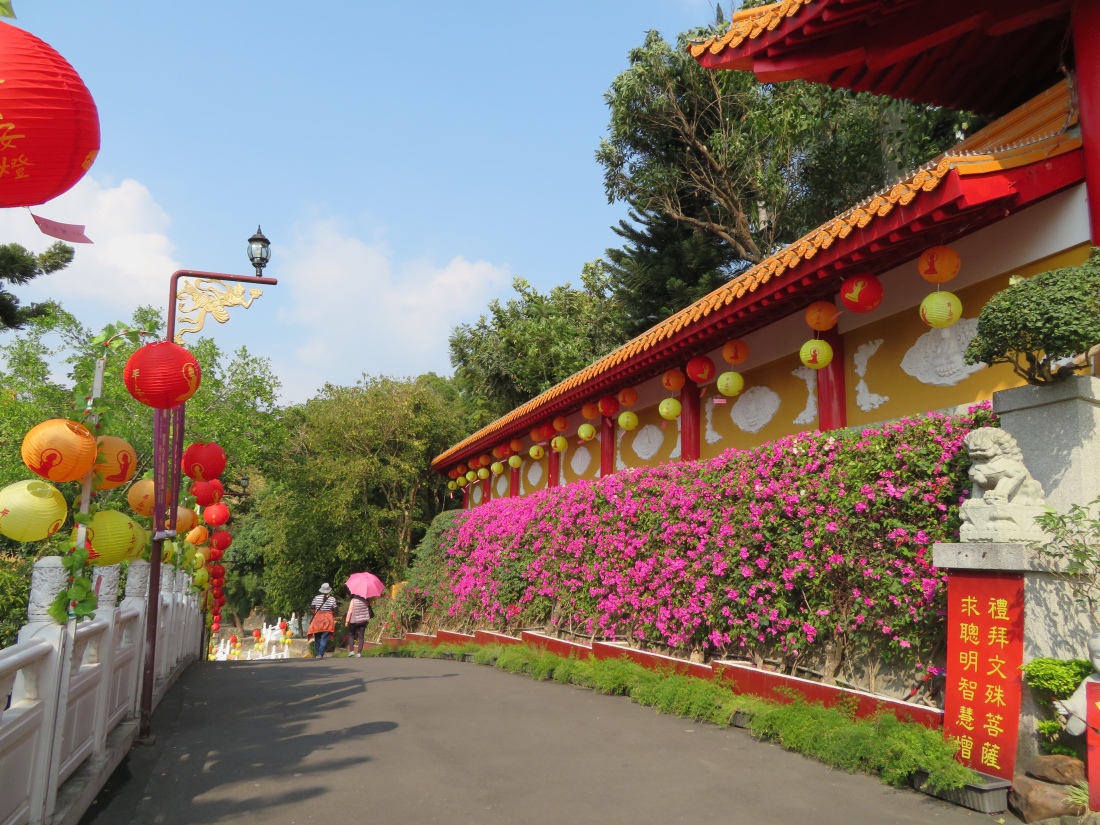 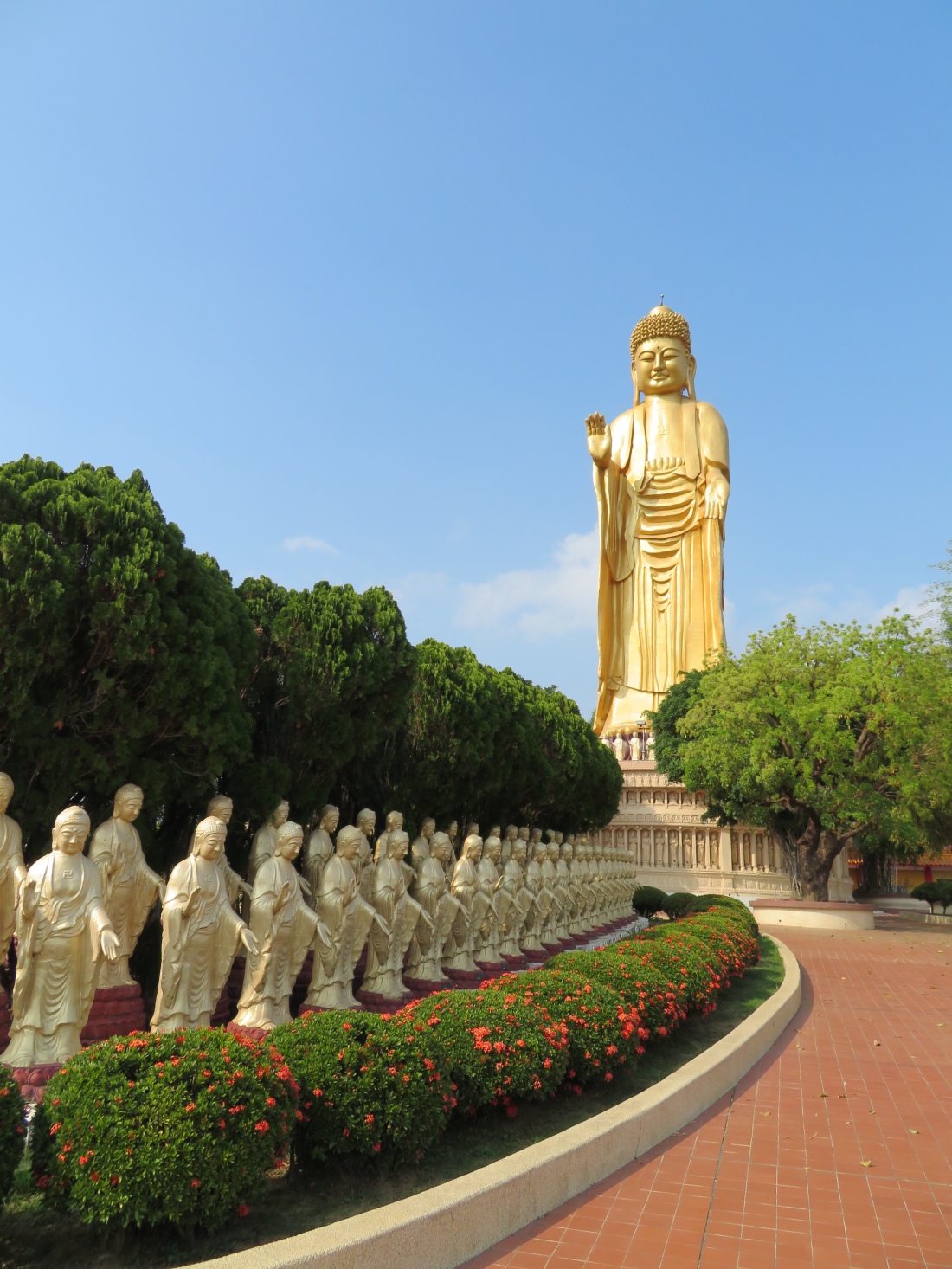 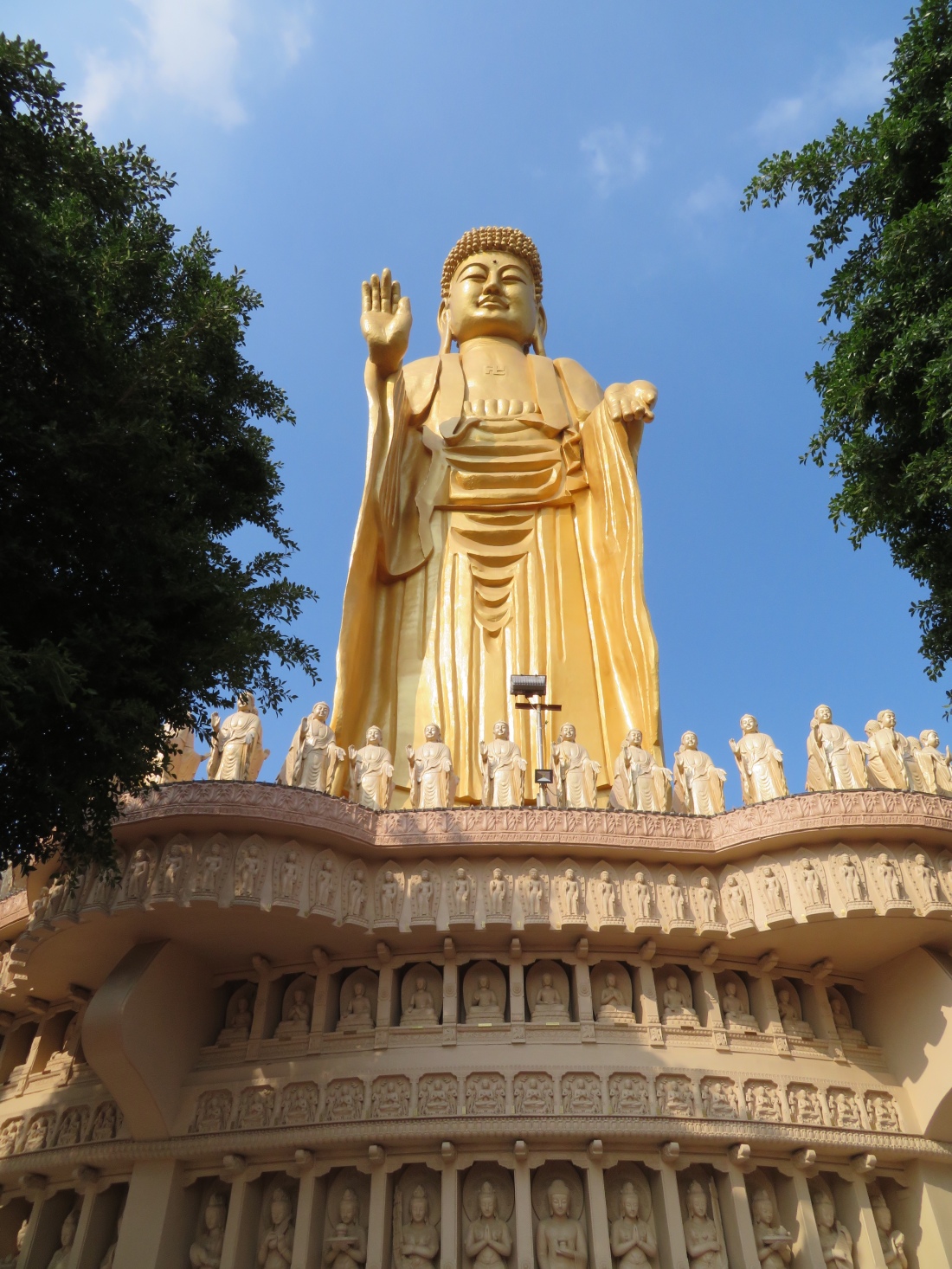 I sat for awhile just to enjoy my surroundings and then I had to start the long 20-30 minute walk back. I made a few stops along the way to get some more pictures, as the beauty of this place was overwhelming! 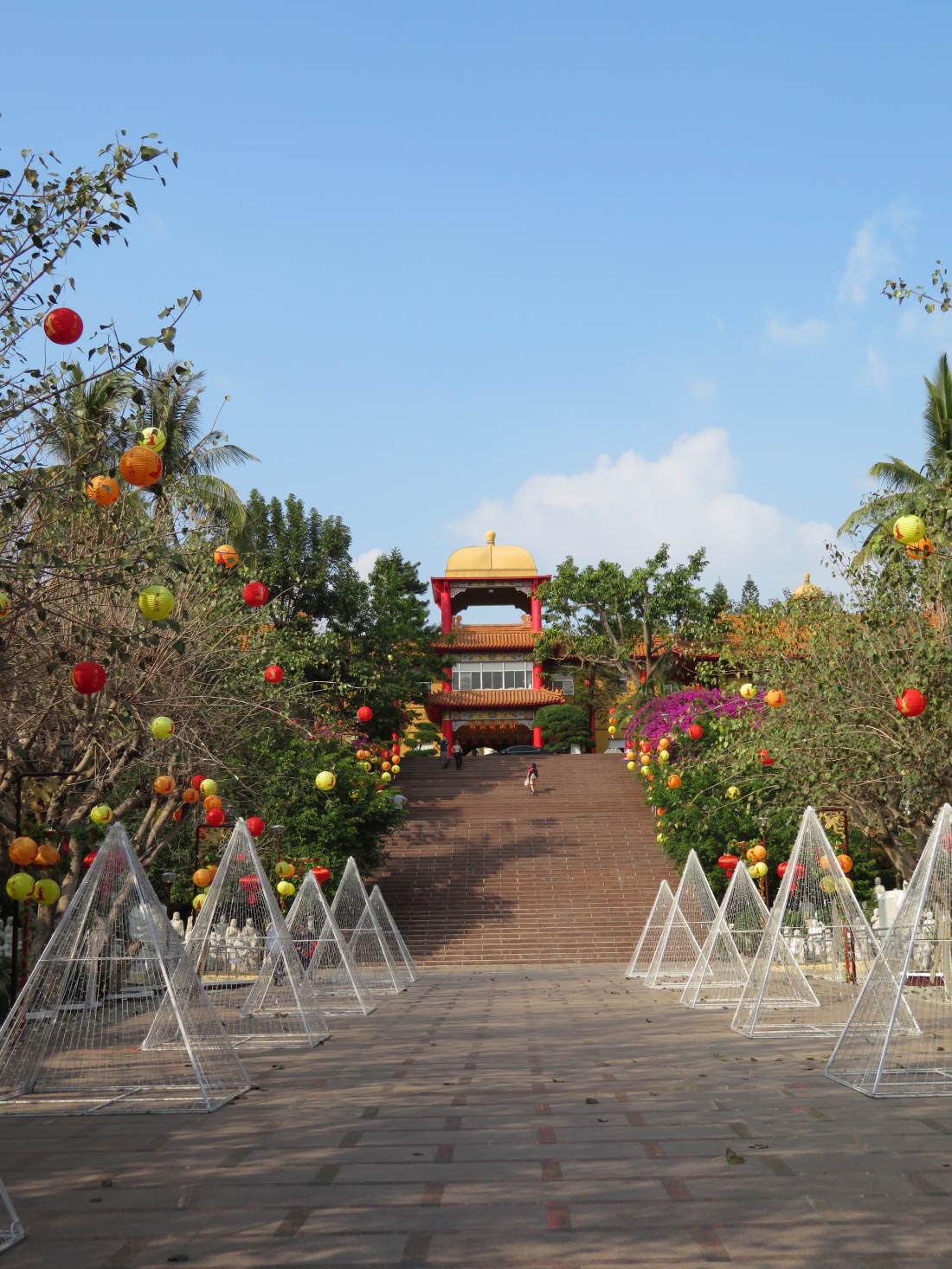 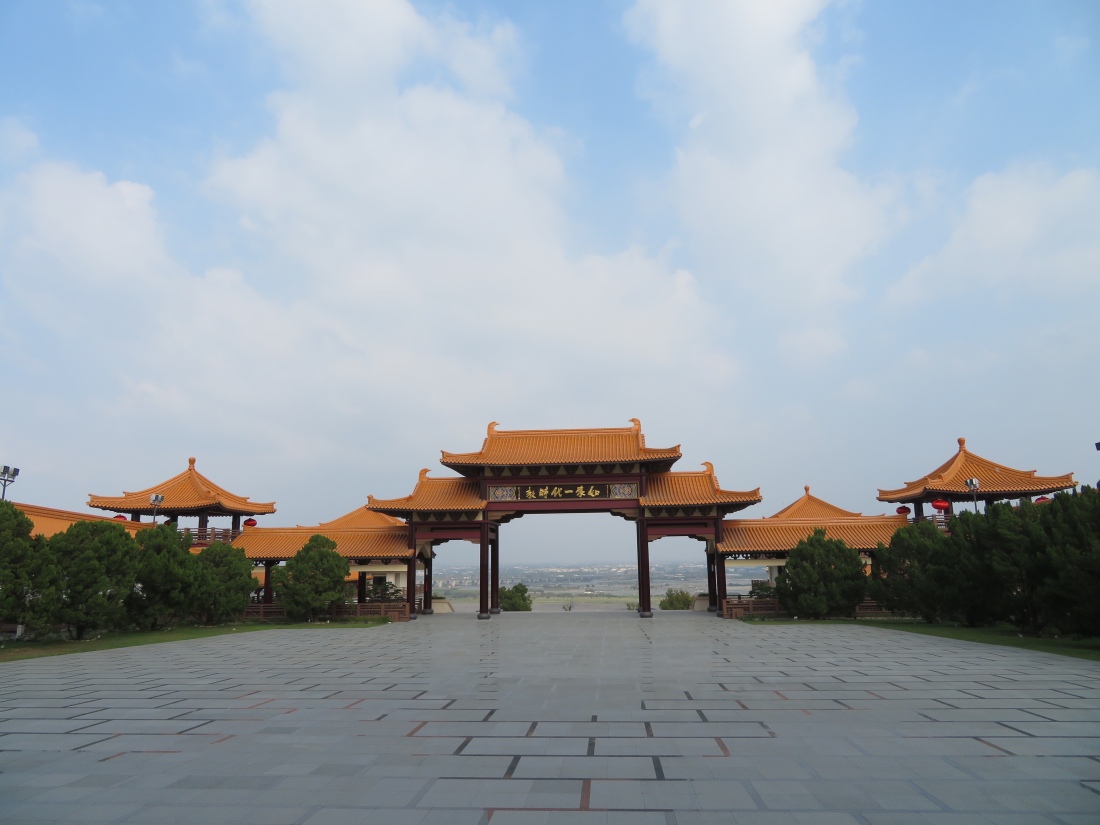 I knew what time the next bus would come and arrived with about 10 minutes to spare but when I got there, there was a huge line-up of people waiting! I joined the line, but wasn’t too sure if I would make it on. Once the bus arrived, everyone boarded and when I was the third person in line, they said that there wasn’t anymore space. The next bus wasn’t for another hour and a half until after 5pm! I did some research (because I didn’t really want to wait around for an hour and a half) and saw that there were some non-direct buses that would still go into Kaohsiung (they’d just take longer). However, all of the buses that arrived were written in Mandarin so I couldn’t tell which direction they were going. I went on the next two that arrived and asked “Kaohsiung,” but the drivers shook their heads. I noticed some people waiting at the 8501 bus stop and when I looked it up, I saw that it would be going where I wanted. It would arrive in about 15 minutes, so I switched lines (and basically everyone else followed suit). I’m glad I did because once again, the bus completely filled up when it arrived. I got back to the Zuoying station just before 5:30 and by that point, I was starving. I was planning to go to the Ruifang night market later that night, so I just went to McDonalds and got some fries and a McFlurry for 97TWD ($4.31). 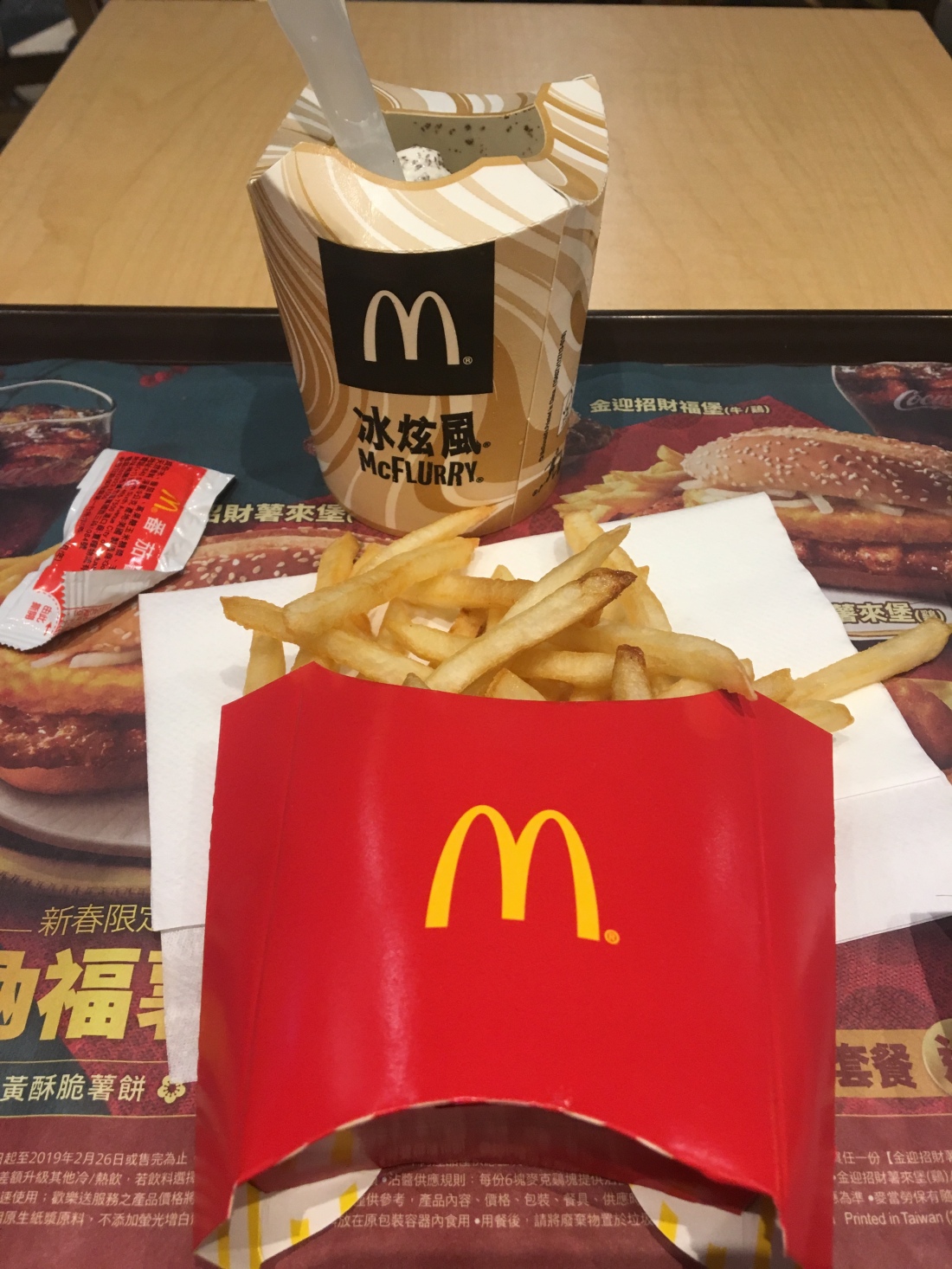 Up until this point, I’ve managed to spend my entire time in Taiwan without going to an American-style fast-food restaurant so I did pretty well! I went back to my hostel to relax for a bit before going to the night market. My dad’s best friend had invited me into a group chat on Facebook with a guy who also had roots from Saskatchewan (and more specifically from Kamsack, where my dad is from). Apparently, our dads used to hang out when they were younger and since we were both in Taiwan, my dad’s friend suggested that we meet up. Tyler and I made plans to meet when he finished work (at 8pm) and go to the Ruifeng Night Market. Tyler had been teaching in Kaohsiung for the past 11 years, and was only five years older than me. Even though neither of us had heard about each other’s dads, it was still nice to meet up with someone from home. We walked around the night market for a bit, where I got some soup dumplings (60TWD/$2.67) and tried stinky tofu for the first time! 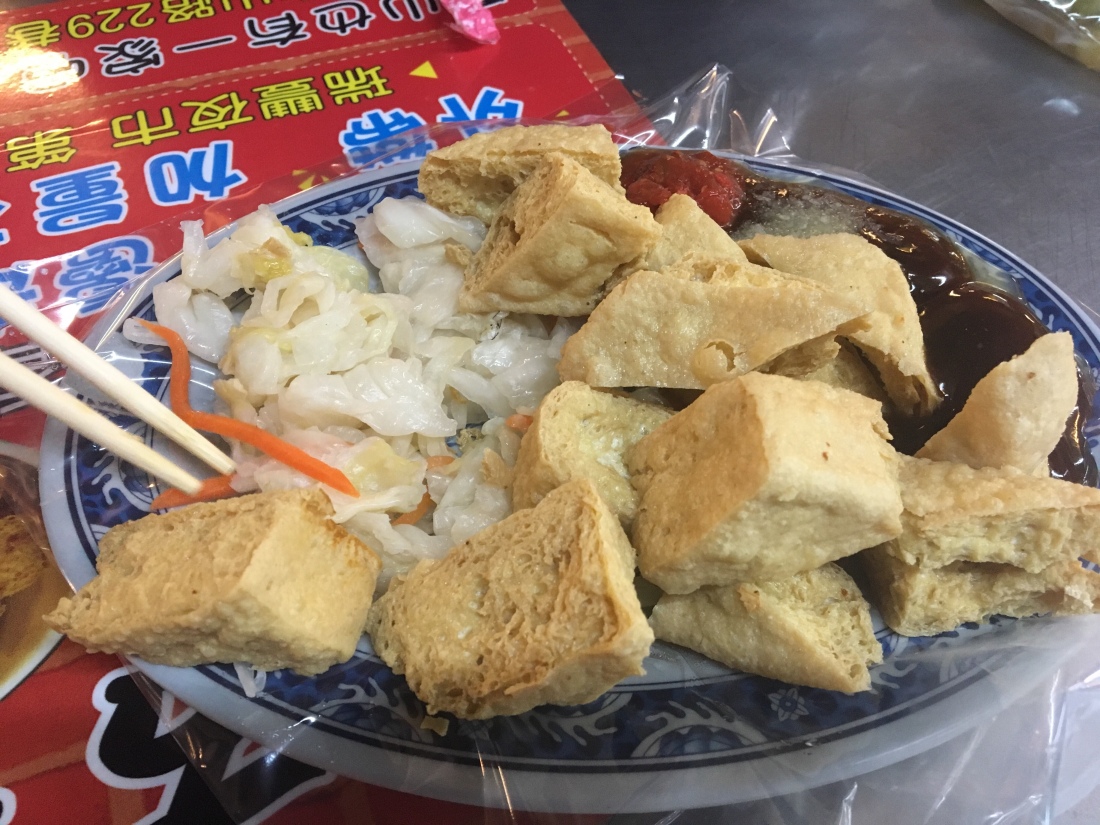 Honestly, I liked it – you don’t even smell it while you’re eating it because the smell already hits you by the time you get to the stand. I then tried a crepe-like dessert, which was filled with sesame seeds and was so good! Tyler and I met up with his flatmate, Christine, who had an extra bike helmet that I was able to borrow. She was meeting up with some of her friends, so she bought a bunch of flowers and gave each of us one for Valentine’s Day. We then picked up some bubble teas (I got a grapefruit one, which was delicious!) before getting on the motorbike to go to our next destination.

This time, I had to hold the flowers and bubble teas with one hand, which meant I only got to hold on to the motorbike with one hand – not bad for my third time! We went to Shoushan mountain, where there’s a viewpoint overlooking the city. Forgetting that it was Valentine’s Day, we realised that we were surrounded by tons of couples and had a saxophone busker, whose music travelled throughout the valley. We chatted for quite a bit and then Tyler drove me back to my hostel.

On Friday morning, I got up and had breakfast at the hostel. There was an older man named Henry who was from Taipei, and he came up to me and said, “Your face look like movie star,” which was honestly such a nice thing to say first thing in the morning when I hadn’t even had my coffee yet. Henry introduced me to a guy from California named Krister who was also planning to go to Tainan that day. We chatted until checkout time and then we both left for Tainan, which I’ll save for another post. Love always!