Can’t believe I’ve been gone for 4 weeks now, where does the time go? On Tuesday, I went to visit the first family that I was with when I au paired. Alexia and Julien hadn’t changed much except for being three years older. It’s just hard to believe that Alexia’s sixteen now and she’s starting to learn how to drive! It was great to see the family again, and I managed to speak French for a full five hours! Catherine said my French was really good so that made me happy! Although after about 2-3 hours, I was mentally exhausted; it’s hard on the brain to speak, think, and listen in French for so long cause you have to use it constantly. They took me to the Abbaye des Vaux de Cernay, an old abbey from the 12th century. It was so pretty! I would have posted pictures BUT the computer in my apartment has broken down and the owner hasn’t bothered to come fix it. So now I can no longer upload pictures unless they’re taken on my iPod 😦 hopefully I can get to a computer soon to put some up! After the abbey, we went back to the house to play poker. It was a good time! I also left my suitcase with them so all of the shopping I did was for nothing and now, any shopping I do, I’ll have to carry with me. So no more shopping!

On Wednesday, I went on strike. That’s right… Wednesday was August 1st and the day before, I found out that my one-month metro pass was expired. I paid for one month because I’m in Paris for one month but I guess their months are from the 1st to the 1st, so I ended up paying one month for just over half a month. I was so not impressed… So I decided that I wasn’t going to use the metro. I don’t know who I was trying to prove my point to but it’s probably just because of me and my stubbornness. I’m a Taurus, it’s not my fault. So I walked to the mall to eye shop (no, it doesn’t count) and on the way, I found an English pub so I walked in and asked if they could turn on diving. At the time, they were playing cycling (which people were watching) but they changed the channel on all the tv’s just for me! Alexandre Despatie and his partner Reuben Ross got 6th place, but they weren’t expecting a medal in the first place. The REAL event to watch is THIS TUESDAY, August 7th, probably between 12pm and 2pm your time on either TSN, Sportsnet, or possibly CTV!! You might see a lone Canadian girl cheering in the crowd (that would be me). Anyway, after diving, I went to the mall and then walked back home. The entire trip was about 8km, so that was a good way to get rid of the crepes and croissants I’ve been eating! :p Afterwards, I went to the Sacré Coeur with Laura and Kelsi since it was their last night.

Thursday afternoon, I went out for coffee with a friend that I had met in church three years ago, Beatrice. She’s originally from Kenya but hasn’t left France since when she came five years ago. It was so great to see her again and to spend time with her that day, and again on Sunday!

On Friday, I got up way too early to catch the 7:20 train to Arras, a town about 45 minutes north of Paris. I sat at a little café to wait for everything to open and then I caught a taxi to Vimy. The taxi driver kept complimenting my French and said I hardly had an accent!!!!!! You have no idea how hard I’ve tried to sound French, to perfect that “r” noise that comes from the back of your throat: the sound that seems so weird to use because it’s never been used in the English language, but is needed in French so you don’t sound like a foreigner. How many times did Emmanuel tell the kids, “Help her with her r’s; she has to have them perfect before she leaves!” So the fact that I hardly had an accent anymore was a huge compliment! Vimy Ridge was absolutely amazing! I started by taking the tour through the tunnels and trenches. Because the Germans occupied the hill (that the monument is now on), we weren’t able to attack above ground because we would be seen. Therefore, tunnels were built in order to move the soldiers forward. Railways were also put underground to bring in supplies. It was really neat to be able to walk through, but it was tough to imagine how it would have been 95 years ago, under such different and difficult circumstances. On the way to the tunnels, the soldiers had to walk through a field containing all of the graves that were dug in advance, ready to be used (by many of them) once they went into action. The soldiers weren’t allowed to talk to each other and had to stay underground until given the message to move to the trenches. They waited for 36 to 48 hours in the tunnels with only 24 hours worth of food (the attack got postponed because of a snowstorm). To communicate with each other, they used phones but with wires running along the wall, they used morse code, pigeons, and runners. Pigeons mate for life so they would keep the male underground and send it up with a message attached to its leg for it to find its mate and at the same time, deliver the message. In another area, there was one pigeon, Cher Ami (he’s on Wikipedia), that was shot and lost one eye and one leg, and still managed to deliver the message, saving 200 Americans during World War I! Runners were a volunteer position and they were highly respected since during peak war periods, they usually wouldn’t live longer than 3-5 days. They would go in groups of two to run and deliver the message, many times getting killed in the process. Soldiers would sleep in dugouts that were in the sides of the trenches, usually with their feet hanging out because they weren’t very large. Also, the distance between our trenches and the German trenches was about 25 metres! So they were actually able to yell back and forth to each other. I found myself tearing up many times throughout the tour; words can’t even describe the feelings I felt. After the tour, I went to the monument, which is dedicated to all of the Canadian soldiers who died in France. On the monument, there are the names of 11,285 missing soldiers, whose resting place was then unknown. It really is a beautiful monument and area; definitely worth visiting! I always hear how I should be proud to be Canadian and be thankful for my freedom, and we have our Remembrance Day every year, but only until that moment did I actually FEEL it; it was so overpowering and it’s indescribable but I hope that every Canadian has the chance to feel what I felt at some point in their lives, because it’s amazing. I can now truly say I’m proud to be Canadian and I’m so thankful, and I UNDERSTAND. Those kind of things you can’t just learn in school or from a book, you have to learn from your heart. After I left Vimy Ridge, it started to rain so I spent the afternoon in a café before catching the train back to Paris.

Saturday, I didn’t do much except clean the apartment and buy groceries. Sunday, I went to Hillsong for church, then went for lunch with Beatrice. We spent as much of the afternoon as we could in the jardin du Luxembourg, then headed to her church when it started raining. After church, we went to the movie Brave which was so awesome! I heard good things about it, but I wasn’t expecting it to be as good as it was. I then went home to start packing! This afternoon, I leave for London; I’ll be there until Wednesday! Hope you’re all doing great! Love always 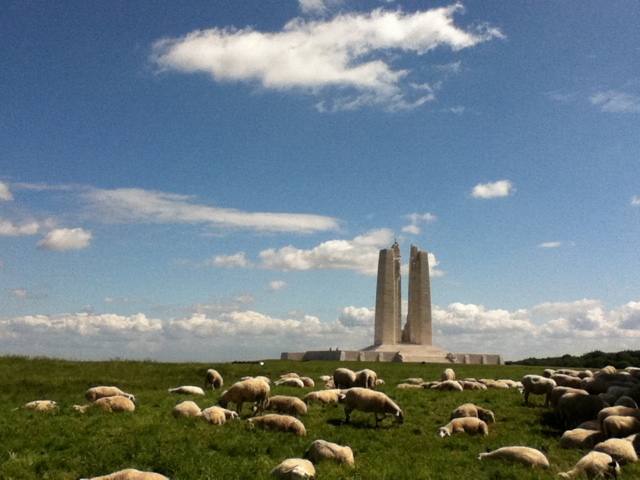 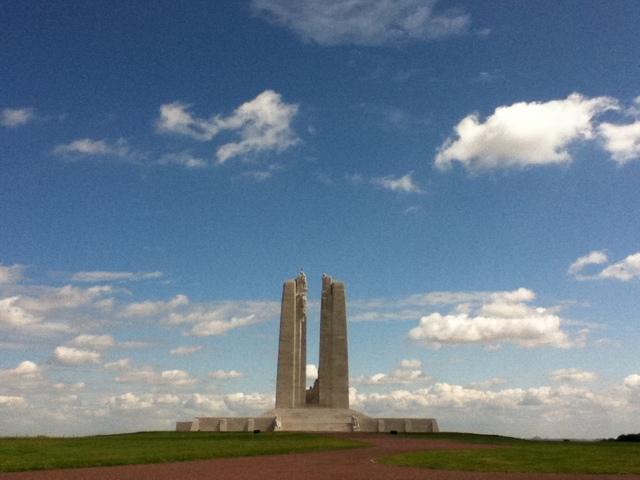